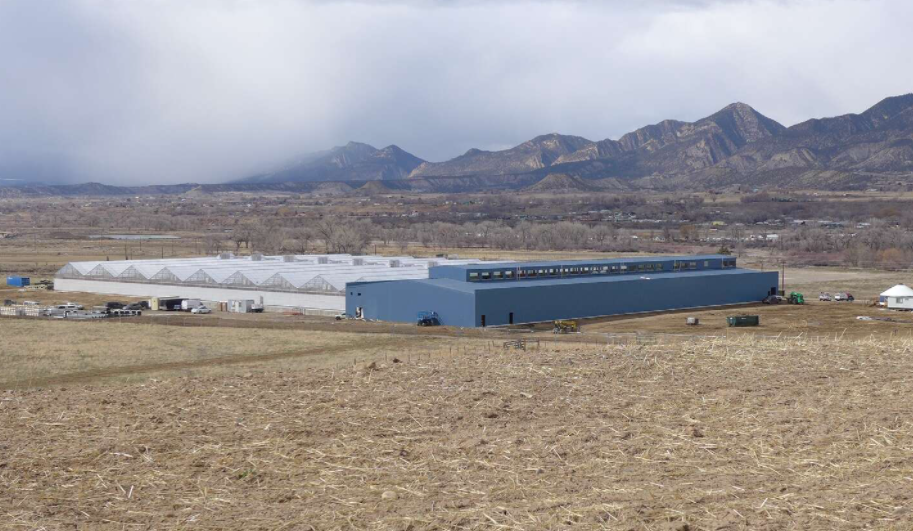 A Colorado state legislator plans to introduce a bill that would expand the definition of a farm and agricultural products to the benefit of a new greenhouse facility in Silt.

Sponsored by Rep. Dylan Roberts, the bill that is currently in draft form would include a “controlled environment agricultural facility,” or CEAF, in the definition of a farm, allowing these facilities to be taxed at a lower rate than they would be if they were classified as commercial.

That’s good news for entrepreneur Charles Barr, who is constructing a 113,400-square-foot, mostly automated greenhouse — which he has dubbed Spring Born — along the Colorado River to grow leafy salad greens. This is the first foray into agriculture for the San Francisco-based businessman. He bought the 254-acre parcel in October 2019 for $1.5 million.

Most of that land — minus 11 acres he has taken out of production to build the facility — is leased to a local rancher and remains in traditional agricultural production growing hay and raising cows. The greenhouse and accompanying warehouse/processing buildings cover 3.5 acres of the parcel.

The plan is to grow lettuce in a sustainable, efficient, pesticide-free way year-round, all while using less water than traditional outdoor agriculture. Once water enters the greenhouse, it’s nearly 100% consumptive, meaning the plants will use it all. The lettuce would be packaged and shipped for sale in grocery stores.

“If I can do that using 95% less water, then let’s do that,” Barr said, referencing his operation’s internal calculations regarding water consumption. “Why not grow the lettuce here instead of letting that water trickle all the way down to Arizona and grow the lettuce there and truck it all the way up here.”

The Spring Born greenhouse, under construction in Silt, is seen from a hill behind the property. State legislators plan to introduce a bill that would include automated operations such as this in the definition of a farm and agricultural products, which allow them to qualify for tax breaks.
Heather Sackett/Aspen Journalism

Barr and proponents of the project say that with climate change increasing temperatures, which in turn increases the amount of water crops need, the future of growing food is indoors. Gail Schwartz, a former state senator and current Colorado Water Conservation Board representative for the Colorado River mainstem, has been involved in helping bring the greenhouse and the bill to fruition.

“I was in an energy conference in Norway last year, and they said by 2050 virtually all of our food will be grown in facilities like this because of climate change,” she said. “We have to control the temperatures and the aridity that is going to impact agriculture long term, and this does that.”

The greenhouse will create about 20 jobs and plans to partner with Colorado Mountain College for a work-training program. Schwartz added that Spring Born could soon take advantage of a rural Jump Start tax-credit program, which is expected to soon be approved in Garfield County. It would allow businesses to apply for a four-year personal property tax exemption from the county.

“In the midst of the COVID pandemic and economic fallout, we are looking for any way we can at the state legislature to incentivize economic development in rural Colorado and the bill seems a great way to do that,” Roberts said.

In the soil of the land

Currently, under Colorado law, if a crop is not grown “in the soil of the land” — for example, in pots or planters, or in hydroponic gutters such as those at Spring Born — it is not considered an agricultural product for the purpose of tax exemptions. Since Spring Born won’t grow greens in the ground itself, that technicality doesn’t allow it to be classified as a farm or the lettuce it produces as an agricultural product.

The value of agricultural land is tied to the productivity of the land — not what the land would sell for on the open market — and owners pay much less in taxes than do owners of commercial properties. Including food produced in a greenhouse in the definition of an agricultural product would allow Barr to save about $250,000 a year in property taxes, according to his attorney David Myler.

“We think the state should incentivize it because of all the benefits,” Myler said. “Essentially, we think we are a farm and we would like to be treated like a farm.”

According to a draft of the bill, hemp- and marijuana-grow operations would not be included in the expanded definition, nor would facilities of less than 10,000 square feet. Roberts, a Democrat whose House District 26 includes Eagle and Routt counties, said last week that he expects to introduce the bill in the next few weeks. Rep. Perry Will, a Republican representing House District 57 which includes the greenhouse site, did not respond to questions about the proposal

Although growing lettuce inside uses less water than it would outside with sprinkler or flood irrigation, Spring Born won’t use the water rights that came with the land Barr purchased to grow greenhouse lettuce.

These water rights — 4 cubic feet per second from the Rising Sun Ditch, which draws from the Colorado River — are still being used to grow hay outside during the summer months. But those irrigation rights can only be used during irrigation season, roughly from late April through October. To grow crops in a greenhouse year-round, Barr will use water from three new wells that he is digging for the project.

The project has an augmentation plan for 25 acre-feet of water from the West Divide Water Conservancy District to replace the water to the Colorado River system and downstream users that it will be using from the well, according to Barr’s water attorney Chris Geiger of Glenwood Springs-based Balcomb & Green.

While most people interviewed for this story were supportive of the CEAF concept, some raised questions about the proposal. Kathryn Bedell is a commissioner for the state agricultural commission for District 4, which includes Garfield County. She doesn’t see a problem with including CEAFs under the definitions of farm and agricultural products, as long as the purpose of the facility is to grow food for people. But if it was up to her, she would change one key point of the bill.

“I think the 10,000-square-foot (minimum) is actually too big, and I would like to see that amended lower,” she said. “To me, that’s catering to big business.”

Garfield County Assessor Jim Yellico said that while growing vegetables is admirable and the technology is awesome, Spring Born is not a farm and should not be valued as such.

“If it were up to me, I would look at this for what it is — a food-growing facility — and propose a new valuation methodology within the agricultural classification,” he said in an email.

Yellico also noted that it seems, for now, that Spring Born is the first and only automated greenhouse in Colorado that this change in the law would apply to.

“My issue is it’s only going to benefit a few people at this time,” he said. “It fits the bill of a special-interest bill.”

But proponents are hoping that if the state creates a tax incentive, Spring Born won’t be alone for long and that more farmers will follow in Barr’s footsteps. They say the bill, if it becomes law, could create an opportunity for traditional agricultural producers to diversify their business by adding a CEAF to their operation.

“I think, as a legislator, I strive to legislate for not just one specific project but to create future opportunities in this field and I think Spring Born will show others in Colorado this is a viable operation,” Roberts said.

Rocky Mountain Farmers Union hasn’t yet taken an official position on the bill, but Dan Waldvogle, director of external affairs, said the organization supports agriculture taxes that are based on productivity.

“I do think that we want to create a future where there are options,” he said. “With the effects of climate change and drought, there could be a need in the future for some of these operations to pivot when you meet that break-even point.”